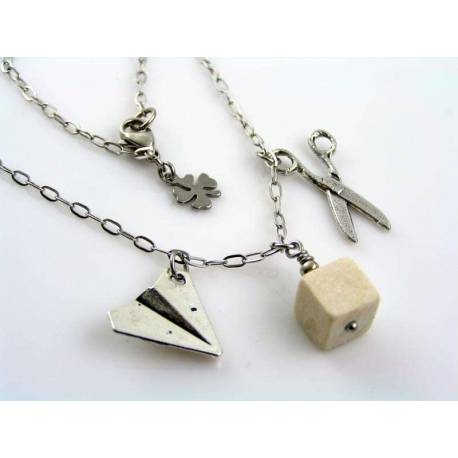 The chain itself is a solid stainless steel chain in an elongated cable chain design. Length of the chain is 45cm and it closes with a lobster claw clasp.

For added luck, I attached a small four-leaf-clover charm next to the clasp.

A fun gift idea for anyone!

"Rock-paper-scissors is a "Zero-sum game" hand game usually played between two people, in which each player simultaneously forms one of three shapes with an outstretched hand. These shapes are "rock" (a simple fist), "paper" (a flat hand), and "scissors" (a fist with the index and middle fingers together forming a V). The game has only three possible outcomes other than a tie: a player who decides to play rock will beat another player who has chosen scissors ("rock crushes scissors") but will lose to one who has played paper ("paper covers rock"); a play of paper will lose to a play of scissors ("scissors cut paper"). If both players choose the same shape, the game is tied and is usually immediately replayed to break the tie.

The game is often used as a choosing method in a way similar to coin flipping, drawing straws, or throwing dice". (borrowed from Wikipedia)