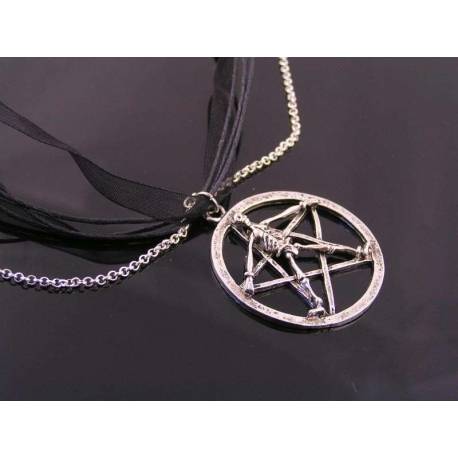 There is one silver tone chain, 3 thin fabric strands and one wider organza strand.

The necklace closes with a lobster claw clasp. Total length is 40cm with a 4cm extension chain and a wire wrapped blood red drop dangling from the last link.

The pendant measures 3.5cm in diameter.

All metal is silver tone.

The pentagram was used in ancient times as a Christian symbol for the five senses and much later gained popularity as a magic symbol, attributing the five neoplatonic elements to the five points.

The five pointed star symbol is also used by one of the Freemason's orders (Order of the Eastern Star) and in the national flags of Morocco (adopted 1915) and Ethiopia (adopted 1996).