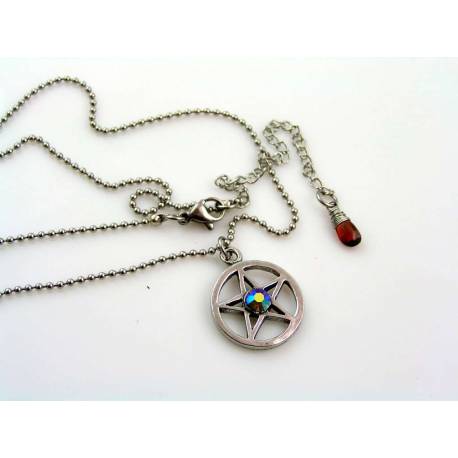 This five pointed star or pentagram pendant is set with a very sparkly, original Swarovski crystal. I have attached the pendant to a slimline ball chain which closes with a lobster claw clasp.

The chain measures 43cm in length and has a 7cm extension chain which sports a wire wrapped Garnet drop on the last link.

Garnet is the birthstone for January or just a beautiful dark red natural gemstone.

If you are a fan of 'Supernatural' the tv series, this would be just the necklace for you. Garnet happens to be Dean's birthstone.

For other gemstone options, please contact me before purchase.

The pentagram pendant is cast out of high quality pewter and the necklace is solid stainless steel.

The pentagram was used in ancient times as a Christian symbol for the five senses and much later gained popularity as a magic symbol, attributing the five neoplatonic elements to the five points.

The five pointed star symbol is also used by one of the Freemason's orders (Order of the Eastern Star) and in the national flags of Morocco (adopted 1915) and Ethiopia (adopted 1996).
* Click here for other supernatural jewellery.