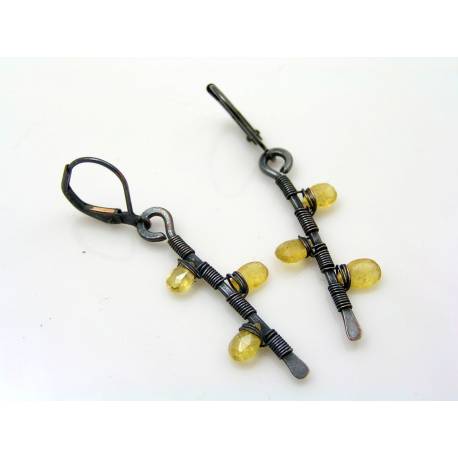 Heliodor (yellow Beryl) is fairly rare in bead form. I decided to wire wrap the faceted briolettes to a hand-formed and hammered 'branch'. The earrings were then oxidised to a dark gunmetal grey and tumble polished to increase strength and shine.

Total length, including the secure, solid copper lever back ear wires is 47mm.

"Heliodor is the yellow variety of beryl, the "mother of gemstones".

Heliodor does not include golden colors which are given the apt name of golden beryl. Other gemstone color varieties that belong to beryl include emerald (green), morganite (pink), and aquamarine (blue). Other colors of beryl are simply referred to by their color, such as in golden beryl and red beryl. Heliodor is found in Madagascar, Brazil, North Carolina and California in the U.S., and in Middle Eastern countries and Russia."